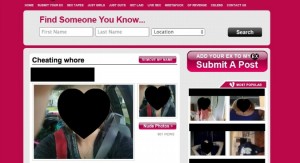 After prosecution by the FTC, and the state of Nevada, MyEx.com will be taken down and victims awarded part of a $205,000 settlement. Neil Infante, the site’s owner, created a page that urged users to “Add an Ex” and “Submit Pics and Stories of Your Ex”. This intimate media was rated and commented on by the public, and remained online for any to search for.

This vile web page used reprehensible tactics to force victims into paying fees ranging from $500 to $2800 to take down images and intimate content from MyEx.com. Frequently, this was only after a user’s life had been ruined by this media in some other way. Victims lost jobs, potential loans, relationships and generally suffered losses to their quality of life thanks to these images and videos freely circulated.

MyEx.com’ horrible tactics left victims with no choice but to pay up, since many were publicly ridiculed and embarrassed in their real lives. The intimate images, often created with people they trusted, were never meant to be shared in this manner.

The FTC’s settlement will do a few things to help compensate victims and prevent this from happening again. First, Nei Infante, the site’s owner, is banned from ever posting intimate media or personally identifiable information to the web again. Infante is also permanently banned from serving as an operating officer for any company in the United States.

If you were affected by MyEx.com, take preventative action with a full audit of your web presence.